Updated 2.5.2022
Work heard at Metro Green facility - they state it isn't in violation with court order. Read more here.
Updated 12.08.21
​Trial set for June 13 2022. Read more here.
Updated 10.08.21
As of September 15, 2021 the Honorable Judge Tangela Barrie has ordered Metro Green to halt construction and operating waste handling activity at the Stonecrest facility. However, the fight isn't over yet.  Check out the full story here and here.
Updated 08.17.21
It's been a while since we last heard anything about Metro Green and Stonecrest. Case # 20cv5610 at the DeKalb Superior Court filing system. As of August 6th the case is still open. Hopefully the county moves to give more visibility to what's happening. We're all still very interested and want to see a ruling in favor of the law and people the law protects.
Updated 05.23.21
​A decision is going to be made soon.

First, I want to start with the law, GA Code 36-31-8 (2019). If you go back and read the law, it breaks down in two ways for this case:
1. If Stonecrest was in transition of power, DeKalb gets final say because according to the law "the new city and other political subdivisions may during the transition period commence, planning, negotiations, and other actions necessary or appropriate for compliance after the transition period". Problem is Stonecrest did in fact adopt the DeKalb County Solid Waste Management Plan after the transition period and Metro Green is not in compliance.
2. If Stonecrest wasn't in transition of power the same holds true: Stonecrest adopted the DeKalb County Solid Waste Management Plan giving DeKalb final say and DeKalb told Metro Green no.

Second, I want to address the fine line between businesses pushing for growth and businesses preying on communities and organizations. I have two questions:
1. Why can't Metro Green just use the space for something compliant instead, working with the community instead of against it?
​2. Whose say is it in determining if a facility is compliant based on the DeKalb County Solid Waste Management Plan?

Updated 12.15.2020
Dec 11th, Judge Tangie Barrie listened to arguments from CHASE (Citizens for a Healthy and Safe Environment) and Metro Green regarding CHASE's motion to intervene. The Judge is deliberating and has not given a judgment yet.
Here's a brief summary of the hearing (no longer available to view on Youtube):
CHASE has motioned to intervene due to the lack of representation for the community members of South DeKalb  - located directly across from the proposed facility site but outside of the City of Stonecrest city limits. Metro Green argued that South DeKalb is being represented by DeKalb County and therefore their interest in this case is redundant. BUT, DeKalb County is only serving as a Defendant, and therefore, cannot fully represent the interest of the South DeKalb community who has argued their health and livelihood are in harms way if this permit is not revoked. Also, because DeKalb County is a Defendant they are only serving in a capacity to protect DeKalb based on allegations brought forward by the Plaintiff - which therefore limits their ability to fully represent the community of South DeKalb at large, hence CHASE's motion to intervene.

Be sure to check out the Stonecrest vs EPD & Director Dunn Dec 18th @ 2pm. Click the link above to watch live on Youtube.
Updated 12.1.2020
CHASE (Citizens for a Healthy and Safe Environment) has filed a motion to intervene against EPD & Metro Green stating their interest in the case will be compromised. Stonecrest has filed a motion to add EPD Director Dunn as an individual to the suit - EPD has stated they will file a motion to dismiss both CHASE and Dunn's suits. Hearing for CHASE's motion to intervene will be held Dec 11th @ 1pm. Stonecrest's motion to add Director Dunn and EPD's motion to dismiss will be held Dec 18th @ 2pm. Click dates to watch hearings live.
*All previous hearing videos have been removed from Youtube* 12.7.2020
​
Updated 11.10.2020
Pre-trial is scheduled for November 30th @ 9 am.
Updated 10.27.2020
Judge Tangela Barrie determined next motion to dismiss hearing dates will fall between Nov 15th - 30th. Watch video from the Oct 26th hearing here.
*All previous hearing videos have been removed from Youtube* 11.04.2020
Updated 10.25.2020:
​There's a hearing tomorrow Oct 26th at 9AM. Dial the phone number below and Conference Code to join. 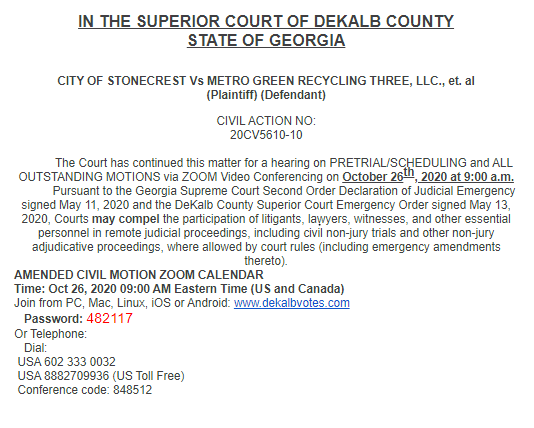 OVERVIEW:
Metro Green is a construction & demolition recycling company with two locations currently - 4351 Pleasantdale Road & 2490 Marietta Road, both located in Atlanta, Georgia completely surrounded by businesses and/or open space - not residences. Both. They were founded in 2012 by Mitchell Stephens who has a relationship with GDOT dating back to his days in helping with the construction of the fifth runway at Hartsfield-Jackson Atlanta International Airport.

They are suspected of unlawfully obtaining building permits for a facility on Miller Rd in the City of Stonecrest - less than 2 miles from Hidden Hills. Both Stonecrest and DeKalb County residents have protested against the building of this facility due to the fear of noise, foul smells, exposure to toxins, decreased property values and more.
Mayor Jason Lary is the current Mayor of The City of Stonecrest where this facility is being built.
Environmental Protection Division of the Georgia Department of Natural Resources  approved a permit for Metro Green to build a facility in Stonecrest on Miller Rd based on approval letters from Mayor Lary and former City Manager Michael Harris. EPD is a state agency charged with protecting Georgia's air, land and water resources through the authority of the state and federal environmental statutes. The current Director is Richard E. Dunn, who was former Deputy Director of Georgia's Govenor Planning and Budget (OPB) - did his tenure overlap with Metro Green's Mitchell Stephens & Hartsfield-Jackson improvements?
DeKalb County Department of Planning & Sustainability is the body that approves all Building & Permit applications for Stonecrest - not the Mayor or City Manager.
THE  FAT
​At some point former Stonecrest Manager Michael Harris wrote a letter to the Environmental Protection Division approving the permit of Metro Green's facility on Miller Rd. Also, current Stonecrest Mayor, Jason Lary, wrote a letter to EPD approving the permit - claiming that they were compliant.

THE SKINNY:
Based on Stonecrest's very own permit process the Mayor & EPD acted unlawfully and the permit should be revoked.

HERE'S WHAT YOU CAN DO:

1. Sign the petition
2. Donate
3. Tell everyone you can to reach out to the following people and let them know how you feel about this: